This year’s Christmas ads have more focus social messages. The brands put emphasis on community, support, and beautiful relationships in their advertising videos.

Here are some of the most liked, commented, shared Christmas ads of 2022.

It focuses on the importance of foster care and reveals the emotional story of a foster father and the enormous efforts he makes for his child. The feeling is enhanced by the great soundtrack and the brilliant cast.

One of the best ads of this season, made for the National Lottery in Great Britain. Two people meet by chance on a train and hastily exchange phone number on the back of a National Lottery ticket. After many complications and tension, the couple gets together, and the girl gets lucky in the lottery, making Christmas truly magical. The ad encourages people to take chances, have hope, buy lottery tickets and believe in the magic of Christmas. It is a great example of a well executed integrated marketing campaign.

This is a beautiful animated story (USA). The family story is compelling and creates strong brand empathy. The magical cookbook once again refers to the love in family and shared memories together.

The Aldi Christmas advert 2022 (Ireland) is a hilarious parody of “Home Alone”. The story begins with Katie, Baby, Jasper and Chantenay rushing through a busy airport as they race to catch a flight to Paris. After they sit happily on the plane, Katie notices that someone is missing… it’s Kevin.

The action moves to a house where Kevin is alone watching a game on TV when he hears the heavy footsteps of an uninvited guest on the roof. Who will he be?

5. Amazon Joy is Made

Amazon UK’s ‘Joy is Made’ is a beautiful ad that shows the joy of doing something special for someone you love. It is effective and leaves a positive feeling about Amazon.

Viewers see a young child captivated by a festive snow globe that he carries around with him. Noticing this, the girl’s father decides to create a life-size version of the snow globe in the greenhouse in their garden. Thus, it creates real Christmas magic for the child.

When we talk about holidays, we can’t do without a little humor. ASDA’s Buddy the Elf is fun, well-liked and puts the festive spirit on display. Will Ferrell’s classic character Buddy is back and has been seamlessly integrated into an ASDA store through some clever tricks. Strong humor, acting and appropriate music make the ad even more attractive and entertaining.

In the ad, viewers see a mysterious man who sets out to ruin the holidays for everyone in a small village. Throughout the night, the dastardly hero slashes the electrical boxes and drains the gas tanks of the cars. Because of his actions, the people of the city are facing an energy crisis.

Determined not to let him ruin Christmas, the villagers gather to lift their spirits and celebrate together.

The ad is a captivating animation, brilliantly voiced, ending with the hashtag #believeinchristmas.

“Just A Little” – an exciting campaign that sheds new light on the gift of giving.

Hannah is a child trying to write a wish list for Christmas. Unlike other children who are excited about toys, she is impressed by television charity campaigns involving children her age.

Her father notices this. On Christmas Day, he tells her he has one last present to open: a donation in her name to support a UNICEF cause.

Lindsay Lohan is the lead in this Pepsi ad. She meets Santa and discovers pilk, a delicious drink that combines Pepsi with milk and cream. It is traditionally topped with cookies. The combination is popularly known as “dirty soda”. The message is that Santa prefers pilk (Pepsi, milk and cookies). The ad is fresh and has a Christmas spirit.

To follow more of the world’s hottest advertising creatives, visit:

BeReal - the most popular social network for 2022 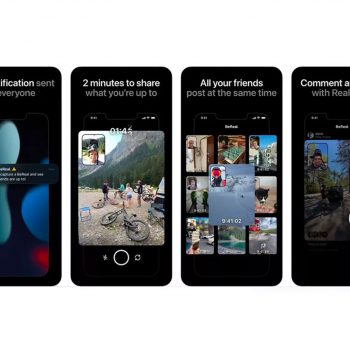